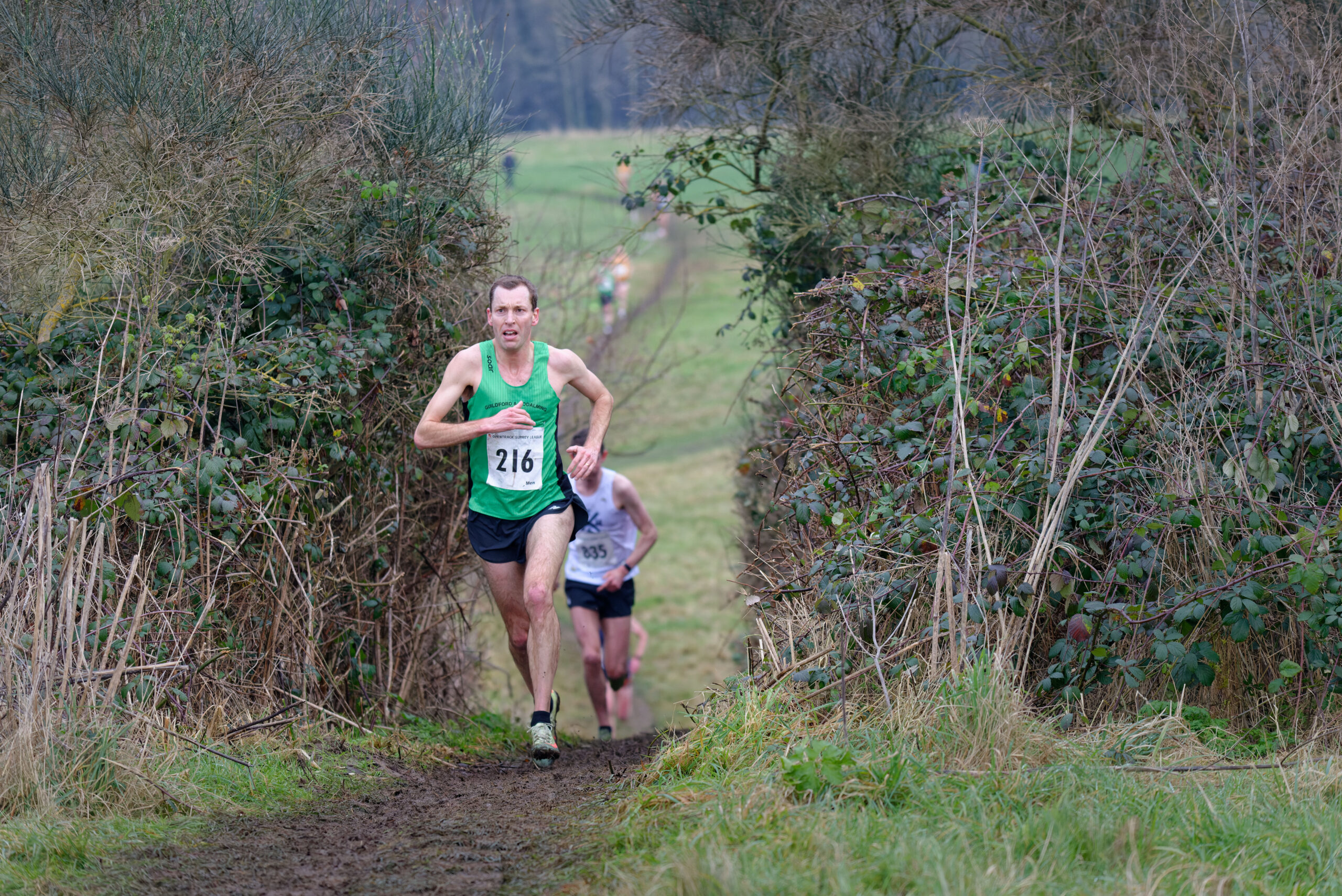 Following on from the Surrey County Championships last weekend at Denbies Wine Estate it was the slightly less picturesque backdrop of Croydon that played host to the 3rd round of the Surrey League Cross Country at Mitcham common.

A team of 8 Guildford and Godalming women headed to Mitcham common on Saturday morning for a pretty flat and fast 8km. Once the train and/or parking had been negotiated, the sun was out ready for a great morning of racing.

Being the first race of the day, the ground was holding up nicely with just a thin layer of mud. Our first GGAC member home was Suzie Monk, with her second-best Surrey League result, although frustratingly being pipped at the line to second place. Suzie was closely followed by Carolyne Baxter, coming home in 5th. Carolyne produced a very strong performance, proving her consistency over cross country and metronomic pace from the out-set to the end.

Next home in 23rd place was Sam Ludlow Taylor. Having battled with an ongoing cough, she managed to survive the cold air and finish an impressive 12 positions higher than in the first league race at Richmond. Sam was closely followed home by Emily Relton in 27th position. Emily has had a great start to the year with 2 hard 8km cross countries 2 weeks on the trot. I am sure the ‘lumps’ of Mitcham common felt nothing in comparison to the steep slopes of Denbies.

The 5th member of the scoring team and helping secure team 3rd for GGAC was Laura Hales, coming home in 98th position and top 6 V50 and closely shadowed by Susanna Harrison in 112th and a superb 2nd V55. Lottie Newman finished a very good 151st in her first season of cross country and Elizabeth Davies bringing us home in 174th. We did appreciate those who came especially early to support, especially Dan with his cam taking some awesome shots, you can never beat a race face!

GGAC Ladies team lie 2nd in the League table after 3 races. Although Belgrave seem to have a healthy lead in 1st there is a real threat from THH who are only 35 points behind so, we look forward to the final league race of the year next month, where we hope to get as many GGAC ladies out as possible to fly the flag and show everyone who’s best!

Guildford put out a strong U13 girls team with Katie Ealden coming through in second place. This was followed by Annie Williams in 18th, Amelie Auckland in 19th and Roisin Davies in 21st. Giving an impressive overall Team 3rd– great racing girls.

Guildfords men continued their ‘resurgence’ in the Surrey League with a strong team of 25 making the trip to South London.

For the second league race in a row, Andy Coley-Maud led the field home team with a commanding win while also rolling back the years by battling it out in the earlier stages of the race with John Gilbert who would eventually end up 3rd behind Jack MIllar. Jack, who is fresh from his victory at the South West Inter-County Championship earlier in the month, is an example of the quality that the league attracts making Andy’s victory even more impressive.

Testament to the quality of the field, Jonny Van Deventer and John Sanderson were agonisingly close to the top 5 (6th and 7th respectively) but still outstanding performances from both to get 3 G’s in the top 10. Jonny VD’s recent winter training camp (and fabulous tan) had clearly done him a lot of good boosting his placing by 10 spots from his outing at Wimbledon. John S performance was enough to put him into 2nd place in the individual league rankings, which demonstrates the consistent high performance and standard that John delivers.

Our long time second claimer Cameron Payas was next home in 15th. This was Cameron’s first outing for GGAC this season due to various clashes with other League races, while he is no longer training with GGAC his dedication to the GGAC cause is most valued in making the long journey up to Mitcham.

Cameron managed to just hold off long time training partner George Dollner (16th) after George closed several places in the later stages of the race. George has consistently improved his performances in cross country races in every race and although it is no secret XC is not his favourite discipline he even admitted to enjoying his outing at Mitcham!

Packed in close behind and keeping George company for the majority of the race was the rebounding Dan Wallis (21st) who continues his return to the form that has seen him clock a low 14 minute 5,000m in the recent past. Dan’s recovery from injury is a lesson in patience and discipline with his perfectly measured ramp rate of milage each week.

Joining Dan in the 20’s was Tom Foster (25th) who continues a run of solid performances on a course that probably suited him better than his Surrey Championships race at Denbies, allowing him to overhaul some competitors that have got the better of him in recent weeks.

Next home in the rush that was the next roughly 90 seconds that equated to 40 placings was James Harvey who is another on an upward trajectory (a just reward for his consistent training) home in 53rd place.

The scoring 10 were rounded out by Ed Dixon (64th) and Harry Boyd (65th). Given this is Ed’s first season of training with a club and only his 3rd XC race it is exciting for all to see how he will progress over the coming seasons. Harry who is another on the comeback from injury delivered a confidence building performance which will hopefully see him in good stead for the remainder of the XC season and into the track season where the 1.51 1500m man really does shine.

Worthy mentions go to James Share, Matt McDaniel and Sam Begg who offered more than adequate back up should any of the aforementioned 10 had difficulty.

In the V40’s (40-49) Nick Tearle put in another cracking performance to come in 8th in a very classy field. Nick is tied for 3rd in the individual V40 standings, with 2nd within touching distance. This should make for a great finale at Effingham

The V50 dream team put in a shift with Mark Tennyson leading them in and following up his 3rd place at Wimbledon with another 3rd place here. Records suggest that this is Mark’s 87th league appearance which is frankly astonishing! Mark will be looking to secure second place in the V50 individual competition at the last fixture.

In all a very good day for the GGAC men, with what we believe to be the lowest ever team score and several breakthrough performances. The team sit 3rd in the table behind Wimbledon and Belgrave but just 10 points ahead of Kent, so it really is all to play for at the last race (and our home fixture) at Effingham.

Full results from all races are here